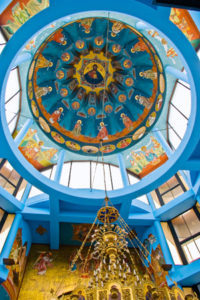 “For the Glory of God and Future Generations” – these words, engraved on the granite cornerstone of St. Joseph Church summarize the inspiration held by a small group of Ukrainian Greek-Catholics on the Northwest Side of Chicago more than sixty years ago. St. Joseph the Betrothed parish was canonically established by Metropolitan of Philadelphia, Constantine Bohachevsky on August 1st, 1956 and is currently under the omophor of His Grace Bishop Richard of the St. Nicholas Ukrainian Catholic Eparchy in Chicago – www.esnucc.org. The eparchy spans across the entire western United States, from Michigan to Hawaii.

Aren’t All Catholics the Same?

NO! The Catholic Church is actually a communion of 23 particular churches. Each has its own distinctive way of worship and its special spirituality. What unites us all is our common faith in the doctrines of the Catholic Church and our acceptance of the Pope of Rome as the “First Among the Equal” heads of Churches. Of the 1 billion Catholics in the world the vast majority belong to the Roman Church. About 20 million Catholics belong to the 22 Eastern Catholic Churches. The largest of group of these are those Churches of the Byzantine tradition.

The first Christian Emperor of Rome, Constantine the Great (273-337 A.D.) divided the Roman Empire in two halves. He established the capital of the Eastern half in a new city built on the site of the small town of Byzantium. This city he named Constantinople. It is today known as Istanbul, in present day Turkey. The adjective “Byzantine” thus refers to the Christian tradition of worship and spirituality that developed in the capital of the Eastern Roman Empire. The common language of this part of the world was Greek; the language in which the New Testament was written.

Almost all the major teachings of the Catholic Church were set down in writing by the Churches centered іn Constantinople. This includes the basic Creed of Christianity first proclaimed by the Councils of Nicea and Constantinople in the Fourth Century. Throughout the first thousand years of Christian history the Byzantine Church and the Popes in Rome were almost always in agreement about the faith, and were in full communion with each other. 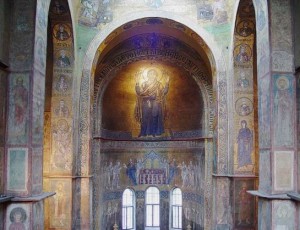 The St. Sophia in Kyiv is the Mother Church of all Kyivan Churches

The Ukrainian Greek-Catholic Church (UGCC) traces its immediate origin to the Kyivan Tradition and is one of four major Churches that follow this Tradition, the others being various Ukrainian Orthodox Churches (…of the United States/Moscow Patriarchate, Kyivan Patriarchate, Autocephalous). Kyiv is the capital of modern-day Ukraine, and the ancient capital the empire of Kyivan Rus’, and so the UGCC takes its name ‘Ukrainian.’ In 988 AD, Kyivan Rus’ accepted Greek Christianity under the leadership of Equal-to-the-Apostles Prince Volodymyr the Great. Therefore, the UGCC is a direct descendent of the Church of Kyiv. One of the official titles of the Church is in fact the ‘Kyivan Catholic Church.’

As one of the churches stemming from Greek-speaking Byzantium, the Church is named “Greek.” Up until the mid-second millennium, Metropolitans of Kyiv answered directly to the Patriarch of Constantinople. In the sixteenth century, the Orthodox Christians living on the territory of the former Kyivan Rus’ found themselves under the Polish-Lithuanian Commonwealth, oppressed by the Catholic Majority and living in fear of the newly-formed Patriarchate of Moscow and the political implications both would have on their Church, being considered second-class citizens and having very few rights. In 1595, the Metropolitan of Kyiv and all local bishops signed the Union of Brest effectively breaking ties with the Church of Constantinople and entering into communion with the Pope of Rome while maintaining beliefs and customs. The official title of the Church “Ukrainian Greek-Catholic” was originally coined by the Austro-Hungarian Empress Maria Theresa in 1774 to differentiate it from the Roman and Armenian Catholic Churches which were prevalent in that empire at the time. It had nothing to do with ethnicity, just as Roman Catholics don’t all come from Rome! 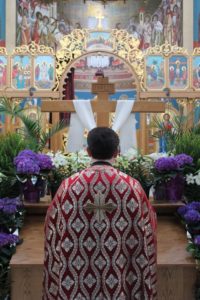 Our Orthodox liturgy, spirituality, and theological outlook is native to the Ukrainian Catholic Church.

We are an Eastern Catholic Church. We understand this to mean that we are orthodox in our liturgy, spirituality and theological outlook, while faithful to our communion, through membership in our local Church, with the Pope. “Orthodox” is a Greek word that means “right believing.” It is in that sense that we believe we can apply it to ourselves. It was this word that the Byzantine Church used to describe itself and those Churches in which it shared Communion including for many centuries the Church of Rome. However, we also acknowledge that the word has come to hold a technical meaning, namely to describe ancient, apostolic Churches that are not in communion with the Catholic Church. Hence, we speak today of the Greek Orthodox, Russian Orthodox, Ukrainian Orthodox, Carpatho-Russian Orthodox etc.

What is the Eastern (Byzantine) Rite

A “rite” is a way of worship, and a whole spiritual insight into the Gospel of Jesus Christ. The Byzantine Churches, Catholic and Orthodox, Greek, Slavic, American and so on, all share the same liturgical and spiritual heritage. Byzantine worship relies heavily on icons. These are sacred images, paintings of Jesus Christ, His Blessed Mother and the saints. We do not worship these images as idols, but rather we see them as “Windows into heaven.” They are points of contact between us and the holy people and events they depict. They are proof that God in Christ Jesus became a man, that Heaven became one with earth, and that here in our own lives we can touch all that is holy and good. The Byzantine tradition also insists on the essential unity of human beings: body, soul (mind) and spirit. All aspects of the person are involved in worship. The body is taken up in sights (icons), scents (incense and candles), touch and taste (blessed foods and flowers). The mind and the emotions delight in the sacred mysteries of the faith sung in sublime religious poetry across the whole musical spectrum (the eight “tones” of ancient chant). The spirit is called to unite to God in sacramental prayer in the long services in Church, and in observance of unstinting private prayer. Outside of the Church, Byzantine Christians are expected to live lives of great holiness, again touching every aspect of their lives. Prayer, fasting and almsgiving are the three pillars of Byzantine Christian “praxis” (i.e. the practical application of the Gospel). In turn this leads one to direct Communion with the Holy Trinity, a process called “theosis”, which means to enter into God’s own life of eternal love.