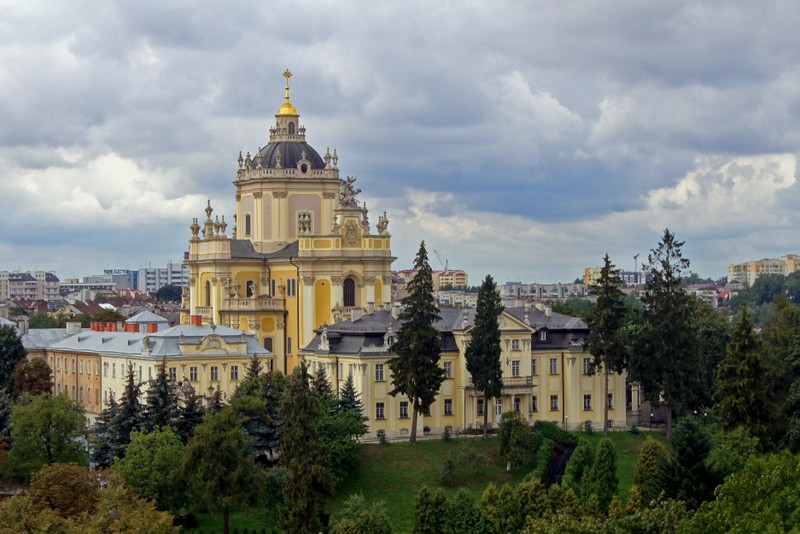 Ukraine has a long Christian tradition, dating from the 10th century. Today there are more than 22,000 religious communities in Ukraine from approximately 80 different Christian denominations, as well as other religions. But the atheist policy of the Soviets has left its mark: many Ukrainians today are unchurched because of the great spiritual void which the Bolshevik regime left in Eastern Europe.

The Conversion of Ukraine and Tensions Between East and West

In 988 Prince Volodymyr the Great established Christianity in its Byzantine-Slavic rite as the national religion of his country, Kyivan-Rus. This happened before the Great Church Schism of 1054 divided Christian East from West. The Kyivan Church inherited the traditions of the Byzantine East and was part of the Patriarchate of Constantinople. Yet this Church also remained in full communion with the Latin West and its patriarch, the Pope of Rome.

Though Constantinople and Rome had their disputes, the Kyivan hierarchy tried to work for Christian unity. Representatives from Rus participated in the Western Councils of Lyon (1245) and Constance (1418). Isidore, the Metropolitan of Kyiv, was himself one of the creators of the Union of Florence (1439).

The Kyivan Church was challenged by the Protestant Reformation and the renewed Catholicism of that period and was also suffering a serious internal crisis. The Synod decided to pass under the jurisdiction of the see of Rome. The traditional Eastern rite of the Kyivan Church was preserved and its ethnic, cultural and ecclesial existence was guaranteed. This was confirmed at the Council of Brest in 1596, which is the beginning of the Ukrainian Greek-Catholic Church as an institution.

Some hierarchs and faithful of the Kyivan Church,however, insisted on remaining under the jurisdiction of the Patriarchate of Constantinople. Torn by internal division, the Central and Eastern sections of Ukraine passed under the control of the ruler of Moscow in 1654. Soon the Orthodox Kyivan Metropolitanate was under the authority of the Moscow Patriarchate (1686). As the Tsarist Empire grew, it repressed the Greek Catholics and forced “conversions” to Russian Orthodoxy (1772, 1795, 1839, 1876). The Pratulin Martyrs died as a result of these repressions.

Orthodox clergy and laity in Ukraine were dissatisfied with the close connections of the Russian Orthodox Church with Russian national interests. “Ukrainophile” movements began and after the Russian Revolution in 1917 a movement began to gain autocephalous status for Ukrainian Orthodoxy. Attempts to proclaim autocephaly in the 1920s and 1940s were, however, repressed by the Soviet powers.

All of Ukraine had been part of the Polish-Lithuanian Commonwealth at the time of the Council of Brest, and western Ukraine remained so. The Church played a leading role in preserving the cultural and religious independence of the Ukrainian population there. As the western Ukrainian lands later passed into Austrian control, the imperial government of the Hapsburgs supported and protected the Greek-Catholic hierarchy.

At the beginning of the 20th Century the Greek-Catholic Church in Halychyna was graced by the exemplary leadership of Metropolitan Andrey Sheptytsky (1901-1944). He was the spiritual leader during two world wars and seven changes of political regime, including Nazi and Soviet. His tireless pastoral work, his defense of the rights of his people, his charitable and ecumenical efforts made the Church an influential social institution in western Ukraine.

The Legacy of Totalitarianism – Ukraine in the 20th Century

It is the tragedy of the 20th Century, the epoch of terror and violence, which has most affected the development of religious life in contemporary Ukraine. Approximately 17 million people are estimated to have died a violent death in Ukraine in the 20th Century. It is even more tragic that these losses were caused not just by war and conflict but by utopian ideals of re-building the world.

The war on religion was the ideology of the Communist regime and no effort was spared. Church buildings were ruined, burnt down, profaned; priests and faithful, Orthodox, Catholic and representatives of other religions were shot, arrested and deported to the Siberian gulag; church communities were persecuted, confined to underground activities or entirely destroyed. Both the Ukrainian Autocephalous Orthodox Church at the beginning of the 1930s and the Ukrainian Greek-Catholic Church in 1946 in Halychyna and in 1949 in Transcarpathia were liquidated. The Roman Catholic Church and Protestant churches survived in only a handful of carefully monitored churches.

Even the activities of the Russian Orthodox Church (which functioned as a state church) were limited and it furthermore suffered from infiltration by Soviet security structures. There was a progressive spiritual vacuum and a deepening demoralization of society.

With the crisis of Soviet power in the 1980s, the suppression of churches ceased. The formerly forbidden Ukrainian Greek-Catholic Church emerged from the underground and communities of the Ukrainian Autocephalous Orthodox Church were created in 1989. The declaration of Ukrainian independence in 1991 created a new context for the activities of all the churches in this territory. Thus, official religious freedom in Ukraine opened the way for religious pluralism.