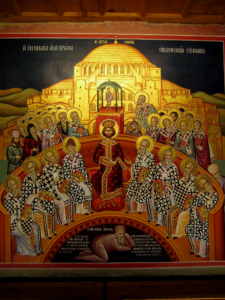 The Nicaean Church Fathers, the authors of the definition of our faith.

The Nicean-Constantinopolitan Creed, (AD 325, 381), also known as the Profession of Faith, is a concise summary in 12 articles, of what we as a Church believe. The Creed was written at these two Ecumenical Councils, which means the entire Church was present, so that it could serve as a guide of faith. Each phrase was very carefully debated and written so that one could say that if you do not agree with even one of these articles of faith then you could not consider yourself a Christian.

According to the first article of the Union of Brest, the 1595 document unifying the Ukrainian Orthodox Church with the Holy See, the Church outright rejects the “filioque” clause (that the Holy Spirit proceeds from the both the Father and the Son) of the Nicene Creed:

“Since there is a quarrel between the Romans and Greeks about the procession of the Holy Spirit, which greatly impede unity really for no other reason than that we do not wish to understand one another – we ask that we should not be compelled to any other creed but that we should remain with that which was handed down to us in the Holy Scriptures, in the Gospel, and in the writings of the holy Greek Doctors, that is, that the Holy Spirit proceeds, not from two sources and not by a double procession, but from one origin, from the Father through the Son.”