Byzantine Church Architecture – What it all Means

The Eastern Christian Tradition as we know today has evolved since the inception of Christianity. However, there are several fundamental features that have remained unchanged for thousands of years, some even from before the time of Christ. 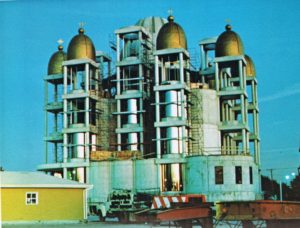 St. Joseph’s Church building, like every other byzantine church, is based on the architecture of the Hagia Sophia in Constantinople.

The best place to experience the awesome scope of Eastern Christian spirituality is in its colorful symbolism; a symbolism which is deeply rooted in its culture, heritage, tradition, and especially in its history. The church building is a prime example of Byzantine symbolism, much of which has probably been lost over the past millennia. The modern church building contains a hodge-podge of architectural influences, from the ancient Hebrew temple in Jerusalem and old-testament synagogues to forums and meeting places of the Greeks and Romans.

The byzantine church building consists of three major sections, the narthex (притвор), the nave (нава), and the sanctuary (святилище); all equally important. 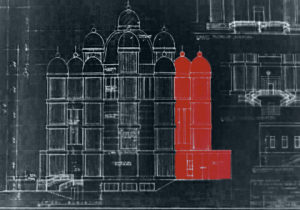 We begin in the narthex, otherwise known as the vestibule of the church. The narthex is a passageway into the nave, this is where the faithful prepare to celebrate the communal experience in the presence of God by leaving their earthly cares and worries behind so that they do not interfere in our direct connection with God. If one were to enter the nave unprepared then it would be difficult to accept and contemplate the heavenly mystery of the church. Keep in mind that the narthex is still symbolically on earth, whereas the nave is a gateway to the kingdom of heaven.
The narthex is an integral part in byzantine worship. When we are baptized, chrismated, married, and buried, the services all begin in the narthex and move into the nave.

As we enter the nave we leave earth and are immediately greeted by an overwhelming rush of senses. We experience the sheer awesomeness of God by almost leaving our earthly bodies behind in a sensory overload. The eyes feast upon the colorful icons, the nose smells the incense, the ears hear a beautifully sung Liturgy, we touch and kiss the icons, and we taste the Eucharist, all gifts from our creator to better experience Him. 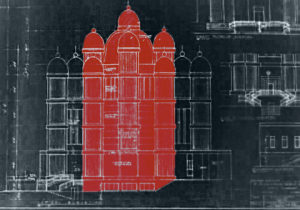 Unlike the architecture of Roman Catholic and protestant churches, whose spires and towers draw the eyes upward, a symbol of a heaven yet to be reached, the architecture of byzantine churches features domes and cylinders, engulfing one in heavenly awe to which they were welcomed at Christ’s Resurrection.

Since it is in the nave that we are assembled in the body of Christ, the dome above this section features a large icon of the Pantocrator (Пантократор), God the ruler and creator of all.
Around the Pantocrator are the four evangelists, one for each corner of the church just as there is one for each corner of the world. The same corners of the world where their words are spread. From the dome hangs a very ornate chandelier that represents Christ, “the light of the world.” Around this chandelier, on the “corona” there are two sets of icons, one set facing the light and the other turned outward. The icons facing the light are Old Testament prophets who prophesied the coming of Christ but were never able to see him, so now they are eternally bathed in His light. The icons facing outward are the apostles and disciples who were told to go forth and teach all nations. 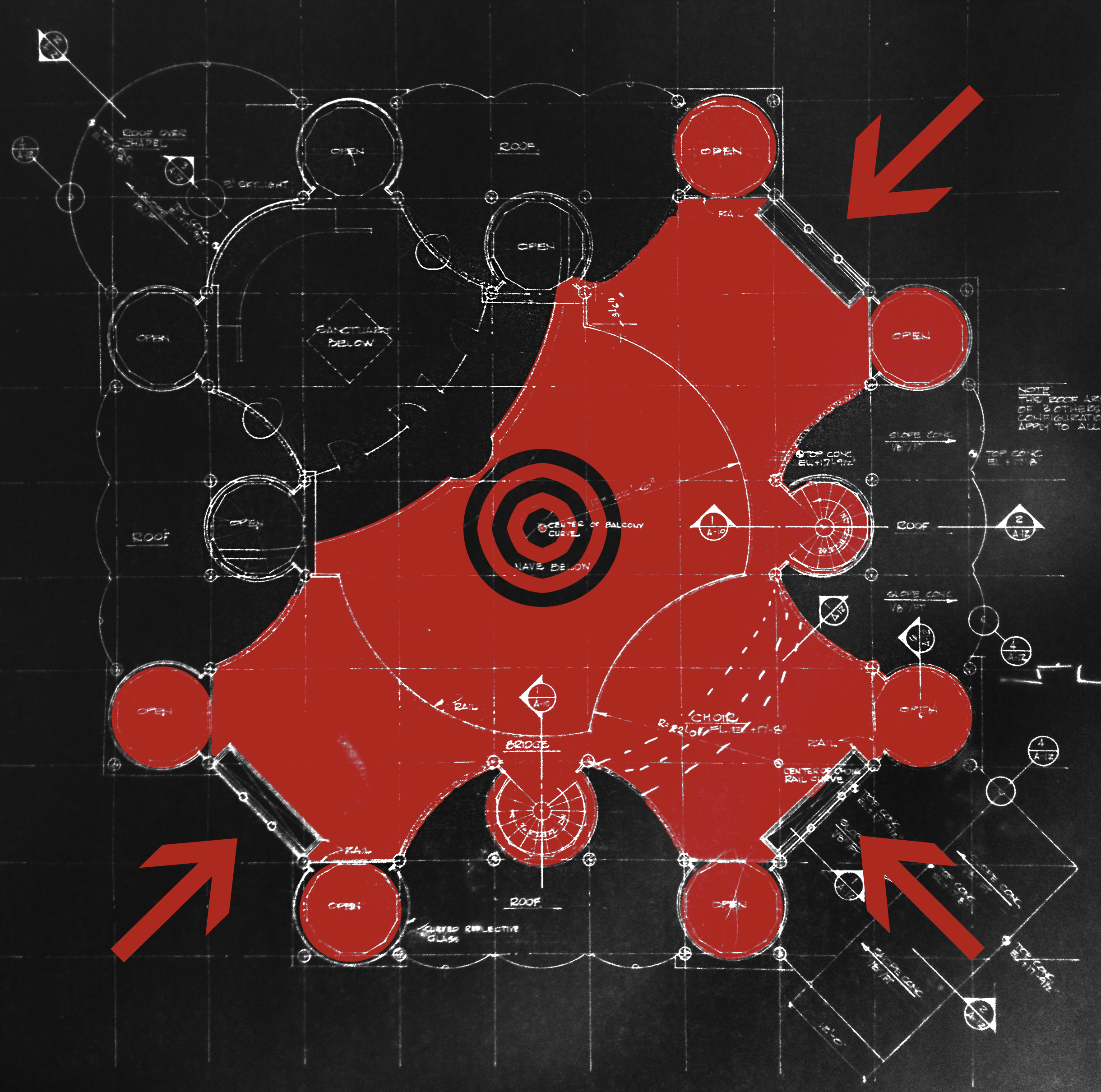 The center of a church building is where the faithful gather. It is from the center, entirely surrounded and in direct sight of all the icons and the faithful, where most liturgical services aside from the Divine Liturgy takes place – reaffirming that liturgy is the work and celebration of the people.

Traditionally, the nave is equilateral in shape restating the fact that communal worship is the basis of our faith. We congregate in the center of the church facing east, the rising sun, the sun which provides us with the light of the world: the son of God. It is here, in the middle of the nave, under the watchful eyes of the Pantocrator, in the midst of the faithful, where major sacramental events take place. The Gospel is proclaimed, the Eucharist is distributed, people commit themselves to marriage, children are baptized, funeral rites are bestowed, and other significant ceremonies take place.

In the nave there are a myriad of icons – icons of the saints, prophets, apostles, and martyrs. They pray with us at all times. One is to feel surrounded by God and so many holy people gone before. Even when there is but a handful of parishioners present, the church is always full. This foretaste of heaven is important because it gives us the energy to continue our daily spiritual journey. In the nave, where we mystically form the Body of Christ, where we are strengthened in our journey by the icons, by the community, by the word of God and the Eucharist, our focus is drawn to the iconostas and what lies beyond it.

The third section of the church, the sanctuary, is separated from the nave by the iconostas. The nave represents the heaven itself; even so, neither the sanctuary nor the people serving in it are perfect – as it represents the perfection of heaven yet to come. In following the teachings of the Holy Church Fathers, we believe that the kingdom is with us, but that it’s full realization is yet to come. The icons of Christ, the mother of God, and the saints on the iconostas stand on the “border” of heaven and face the people, beckoning them on in their journey. 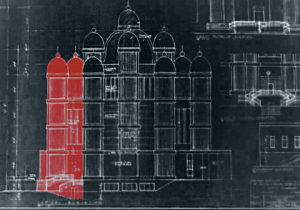 The Sanctuary – The Holy Place separated, yet drawn closer through the iconostas.

Iconostasi appear in many shapes and sizes. Some with one or two tiers, like the one pictured, and others are many tiered, adorned with dozens of icons towering all the way to the ceiling. The rubric for iconostasi rarely goes unchanged, however continuity is not essential. The Mother of God sits on the left side while the icon of Christ is set on the right, just as He is seated at the right had of the Father. Traditionally, it is here, before the icon of Christ, that we reconcile our sins face to face with the priest…and God himself. In the middle of the iconostas are the heavenly gates with images of the four evangelists as a reminder that their words are the keys to the kingdom of heaven. The deacons doors are situated on the north and south of the heavenly gates. The north door the Deacon Stephen, this door is liturgically the exit from the sanctuary, or the door to leave heaven itself and call people in. The south door is the liturgical entrance to the sanctuary. The Archangel Michael, sword in hand is the guard at this door, not to fight off those attempting to enter heaven unrightly, but rather, being the guardian angel, he defends the paths of those who wish to enter. 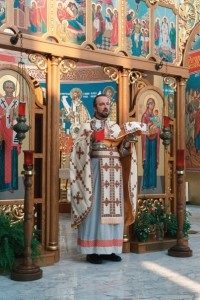 The iconostas originated in the Hebrew temple in Jerusalem where a veil separated the faithful from the mysterious arc of the covenant. Although the iconostas serves a different purpose and has evolved greatly, it still symbolically hides the mystery of the awesomeness of heaven. Yet, during the liturgy the heavenly gates are opened providing us with a peek at the kingdom of God, and ultimately during the Easter season, they are kept open representing the fact that Christ destroyed death and gave everybody the opportunity to see into heaven.

Strengthened by the experience of heaven, we are now able to return to the everyday world we left at the beginning of the journey. We return and share the Good News of Christ with others, building with love, forgiveness, compassion, justice and joy the heavenly kingdom on earth with God.